My wife, kids and I live in our current house for more than 6 years now. Since the beginning, in-house Wi-Fi has been a challenge. Our three-storey house has massive concrete walls and floors, and floor heating everywhere (which I suspect adds another barrier for the Wi-Fi signal). My Wi-Fi setup was as follows:

The problem with this setup? The signal on the second floor was still way too weak to have a proper internet connection. The Wi-Fi signal on both first floor and second floor was quite unstable, I had to reboot access points at least once a week.

A couple of weeks ago, I decided it was time for change. I made a short list of requirements:

Then I did some research (which actually means I did quite some reading of product descriptions and reviews). Two systems made my shortlist: Luma Home and Ubiquiti AmpliFi. Luma Home didn’t have resellers in the Netherlands (yet), and didn’t want to ship to outside the US. Ubiquiti already has a reseller network outside the US, and I found one in the Netherlands that sells their AmpliFi products. So, the choice was made.

The Uqiquiti AmpliFi HD looks sleek, has powerful antennas, and has a nice touch-enabled LCD screen that can show the time, data usage, IP configuration, and current upload/download speeds used on the network. 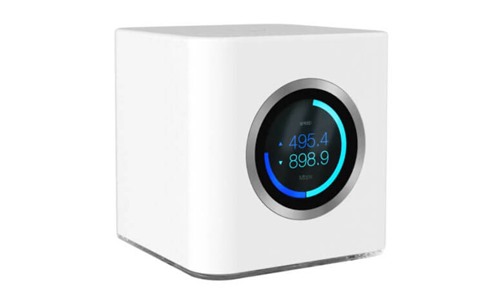 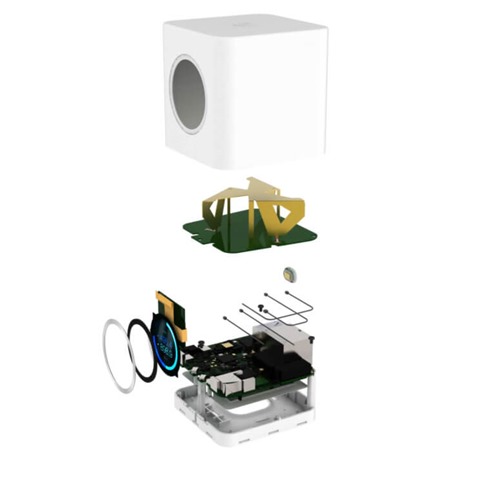 My current setup is as follows:

The result is a smooth and fast operating Wi-Fi in our house, excellent coverage and speeds on ground and first floors, and still very good internet speeds even on the second floor!

Here’s how to set it up, and some explanation of its capabilities.

The setup is done entirely through a mobile app, available for both iOS and Android. You hook up the router to your internet modem and start the app: 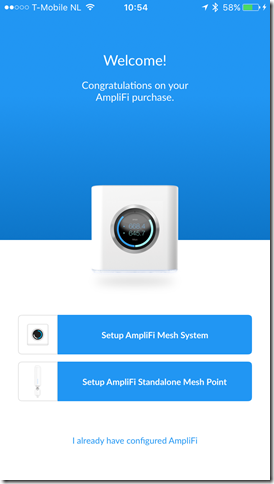 The app finds your router, asks you a couple of questions (Wi-Fi name, password, DHCP settings), asks you to connect to the newly created Wi-Fi network with your phone and you are good to go.

Next time you fire up the app, you will see your router (I gave mine the very original name Router): 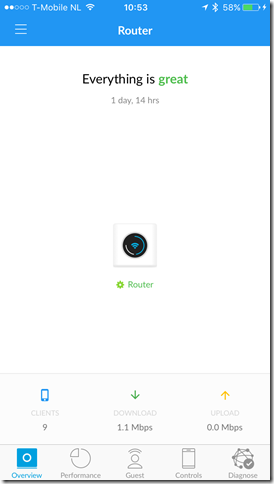 From here you can do additional configuration settings or more (to which I’ll come back shortly).

Time to set up the second router. This is where I got confused a little bit. There is no section in the manual how to add a second router to you existing network. And when you have hooked up the second device and start the app in your existing network, the app will recognise the second device, but won’t let you configure it (you can try, but it will fail). It took me a couple of attempts before I figured out I could just set up the second device as a second system. This will create an additional router in your network, but after setup has finished, you can go to the Internet settings for that device and enable Bridge Mode.

Now the startup screen in the app looks as follows (I named the second device Woonkamer, which is Dutch for living room): 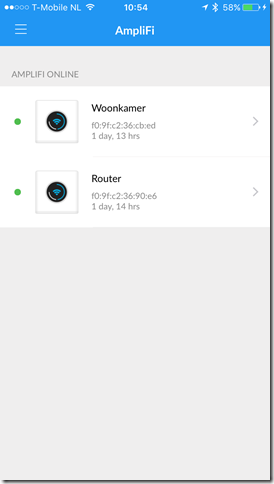 Next, second floor. I just plugged in the mesh point in a power outlet and after a couple of seconds, the device beeps and stops blinking, meaning it has found an existing network and connected. You can check your mesh point from the app again, when clicking the router to which the mesh point has connected (slaapkamer means bedroom, and hal means hallway, which I had unplugged when taking the screenshot): 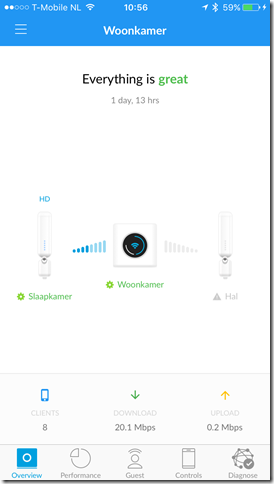 When you click the Performance icon in the bottom menu, you can see current throughput, and you can do a speed test: 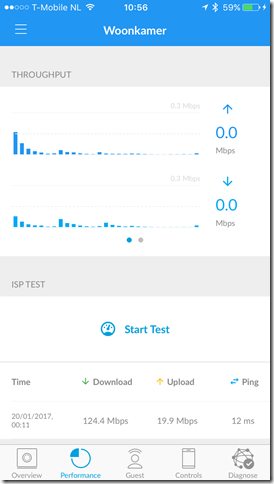 A very cool feature of the app is to set up a temporary guest network, that automatically shuts down after a predefined period of time. Very convenient for parties at home, where you can now set up a temporary guest network without password, so people stop asking you for your Wi-Fi password. (Check out the band steering and router steering options, very nice features that work for the regular Wi-Fi too of course, not just the guest Wi-Fi) 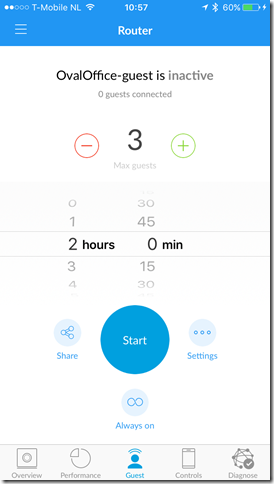 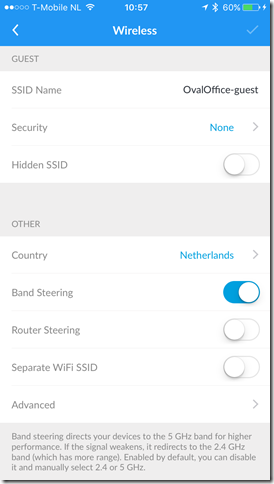 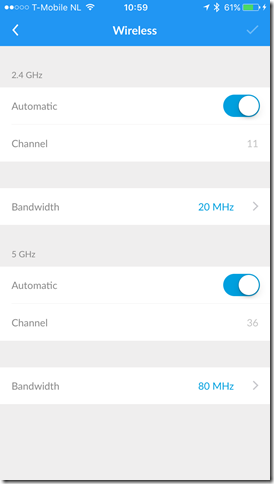 Next tab at the bottom menu is Controls. This is where you can see which devices are currently connected to your network: 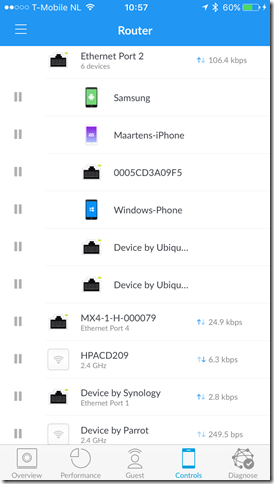 Then some settings you can do on the device. First of all, it is possible to set the brightness of both the LCD screen and the white LED light at the bottom of the device. You can even set up a Night Mode, where it will disable all lights between certain times. 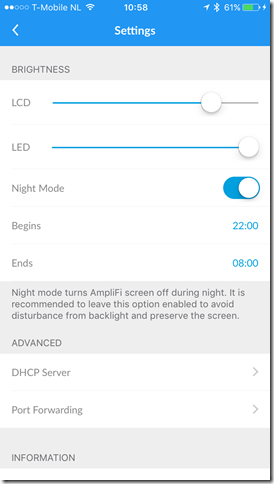 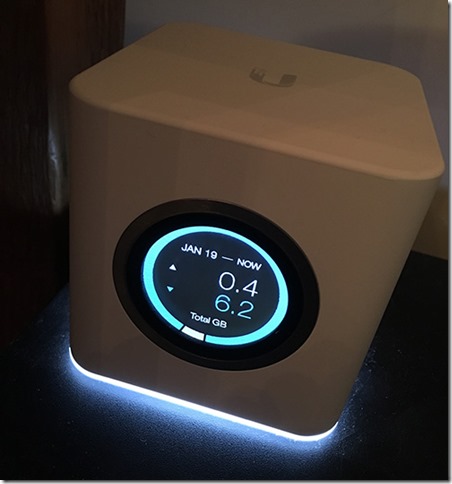 You can set up DHCP server settings and port forwarding settings: 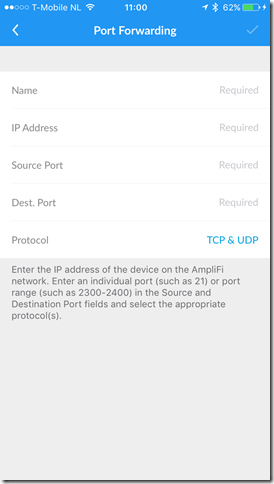 And you can set up your internet network type, clone a MAC address if needed, and disable UPNP if you don’t want to allow that on your network (it is enabled by default). This is also where you can enable the bridge mode we talked about earlier. 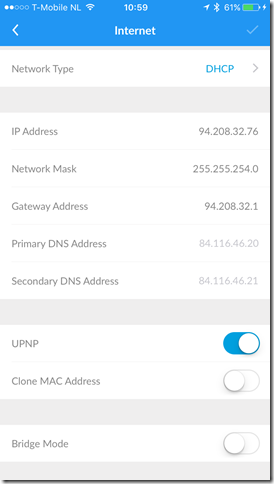 At first it felt a bit weird to set everything up via a mobile app instead of a browser, but the app is very intuitive. And allthough it might not have some of the more advanced capabilities that certain routers offer, it is more than enough for me.

Then, finally, and of course the most important reason for me to buy a new Wi-Fi system, the verdict on speed and reliability. The Wi-Fi performs very good, feels snappy, and hasn’t let me down so far (two days after installation). The speed is excellent! My internet connection speed subscription is 200 Mbps down / 20 Mbps up. Here’s some speedtest results. First screenshot is from our living room on the first floor, second screenshot is from our bedroom on the second floor, where my phone is connected to one of the mesh points. 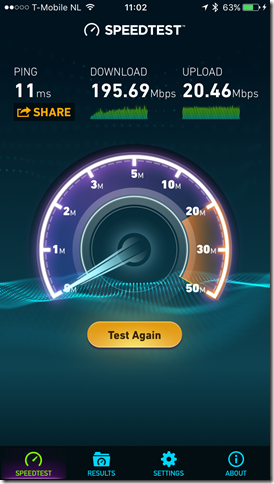 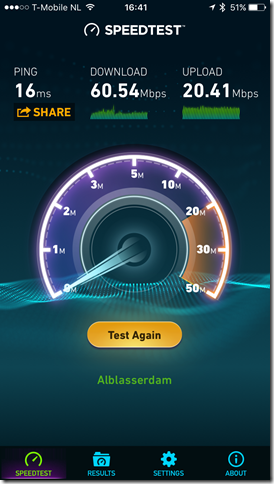 All in all I am a very happy guy and I can recommend this system to anyone who doesn’t need very advanced router settings.